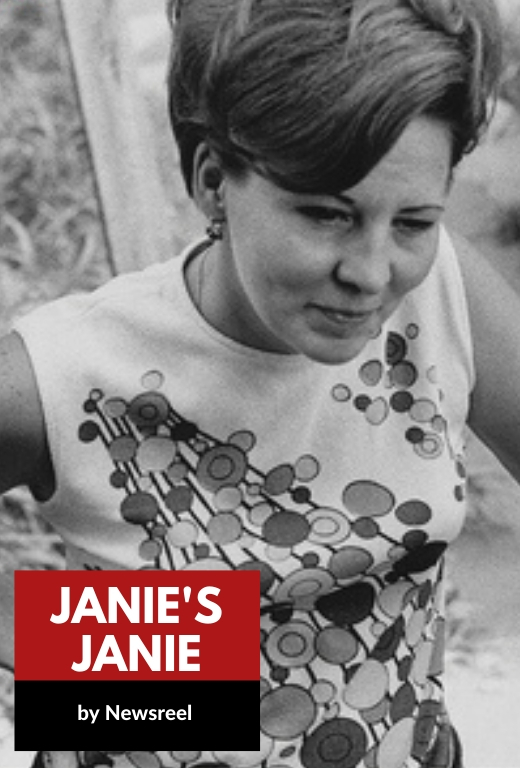 Produced by The Newsreel collective, JANIE'S JANIE is an extraordinary document of the early 1970's women's movement. In this personal documentary, Jane Giese, a working class woman in Newark, comes to realize that she has to take control of her own life after years of physical and mental abuse. As Janie says, "First I was my father's Janie, then I was my Charlie's Janie, now I'm Janie's Janie."

The "personal" aspect of the film was unusual for early Newsreel, and its very existence resulted from gender issue struggles within the collective itself. It is a document of a time and its issues, and of the efforts of feminists to give creative visual form to their concerns. Using both interviews and verité material, it is one of the more complex Newsreel films. Principal collaborators were: Geri Ashur, Peter Barton, Marilyn Mulford and Stephanie Palewski, with music by Bev Grant and Laura Liben.
Third World Newsreel’s historical Newsreel collection provides contemporary audiences with a vast archive of political documentary films chronicling the social movements of the late 1960s and early 1970s.

Thanks to the generous contributions of The Women’s Film Preservation Fund of New York Women in Film & Television (womensfilmpreservationfund.org), original members of the Newsreel collective, and late producer Richard Brick, JANIE'S JANIE has been newly preserved.

"In her own words, this working-class woman tells how, after being dominated by father and husband, she was able to develop her own personality... an absorbing account..." - Richard F. Shepard, New York Times
“Without a trace of propagandizing or cinematic trickery, JANIE’S JANIE simply states the position of a working class woman…This is a story so real it kicks you right in the teeth.” - Arthur Winston, New York Post
“An important early film of the women’s movement” - Museum of Modern Art
"JANIE'S JANIE details the rising feminist consciousness of Jane Giese, a white housewife and mother who recently left her abusive husband, and is navigating the welfare system with six children to care for… For documenting working-class feminist activism in action, for countering wholly-bifurcated stories of race in Newark, and for offering spare but vivid shots of the Ironbound in 1970-71, JANIE'S JANIE is a real treasure." - Prof. Whitney Strub, Rutgers Univ Newark, Strublog: Everything Is Archival
"An excellent film to use to start a discussion on sex roles." - AFSC
"One of the most moving documentaries of the era, Newsreel’s JANIE'S JANIE breaks with their usual format for a more personal approach, following one woman’s journey to self-determination." - Nellie Killian, Tell Me: Women Filmmaker, Women's Stories
"In JANIE'S JANIE, the subject is a poor, white single mother who, in the course of applying for social services, must confront her own racist attitudes as she mingles with African-American moms. In direct-to-camera testimony, Janie recounts her abusive marriage, and the limitations placed upon her and her children because of her economic situation. Nevertheless, her resiliency is apparent... By the end, Janie partners with other single moms to start a daycare program." - Maria Garcia, Film Journal International
"Breathtakingly candid JANIE'S JANIE... follows the experience of a working-class survivor of domestic abuse in New Jersey who opens up about the physical, mental, and emotional toll her violent marriage took. “I feel like the walls were closing in on me — that I was going to have to scream or holler,” she says about her relationship, in voiceover. In another scene, Janie remembers the verbal vitriol her husband used to put her down: “He pounded into my head I was no good. Everything was my fault. I didn’t do it right. I had only my husband to talk to, so I got to believing ‘maybe I am stupid.’ ” Janie’s story ends on a hopeful note... After years of beatings, she breaks free from the men controlling her life and creates one for herself. Later, we see her join a group of women for a meeting. We are not the only ones to witness her roar." - Monica Castillo, Village Voice
"An original and personal approach to documentary form. In the film JANIE'S JANIE, the director, Geri Ashur, elicits the first-person story of a Newark woman named Janie, who, to escape an abusive father, got pregnant at fifteen and married soon after, only to find herself in the grips of an abusive husband. Janie, divorced at the time of filming, both displays and describes her efforts to live an independent life; her discovery of social forces that keep women dependent inspires another mode of self-renewal—local activism that brings practical benefits (as well as an intersectional political consciousness)." - Richard Brody, The New Yorker
"This documentary about a white New Jersey welfare mother combines women’s liberation and welfare rights issues... In contrast to many welfare films that analyze and deplore conditions, this film gives a feeling of hope and liveliness. Janie’s forthright speech is a refreshing change from the dispassionate liberal voices of the network documentaries. Neither Janie nor the viewer are given any illusions about quick change, but we see in Janie a person who has gained some control over her life. And we share her excitement about the process of change." - Betty Reid Mandell, American Anthropologist Journal