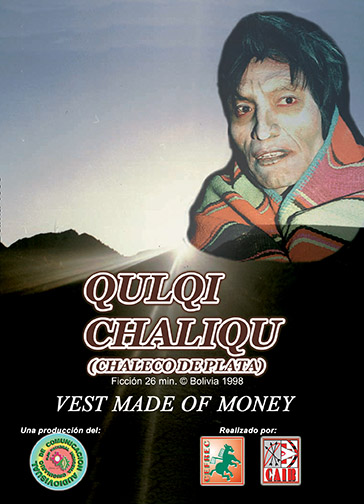 Vest Made of Money
Patricio Luna
Producer: CEFREC/CAIB
1998
Color
25 minutes
Bolivia
Aymara
English subtitles
Photos
Vest Made of Money
Qulqi Chaleco/Chaleco de Plata
In this Aymara folktale about greed and betrayal, Satuco sells his possessions and hides the cash in his vest. In the process, he turns his back on his wife and his community.

Confronting the signs of his own death, Satuco must make his final decision, will he trust his community again or will he entrust his secret to his treacherous friend Cihuacollo?

This short fiction film features the work of non-professional actors and the music of the Villa Santiago II Cultural Center.

TWN is proud to release the work of the Bolivian indigenous media collective CEFREC/CAIB. Since 1996, CAIB (Bolivian Indigenous Peoples’ Audiovisual Council) and CEFREC (Cinematography Education and Production Center) have been at the forefront of indigenous cinema in Latin America, producing a vast catalog of documentaries, docudramas and fiction films for local indigenous communities. Although the work of CEFREC/CAIB has been featured in numerous international film festivals outside Bolivia, this unique collection has not been available for purchase outside the local Bolivian market until now.
Part of the CEFREC/CAIB Collection

“Video becomes a crucial technology for the reinvention of indigenous cultures, directed against the effects of the long-standing discrimination of indigenous people, languages, medicinal practices, as well as their social and economic relations.” - Freya Schiwy, Decolonizing the Frame: Indigenous Video in the Andes
“In this dramatization of a traditional Aymara tale, Satuco hoards money in a vest that he never removes, not even to sleep. When signs tell of his coming death, he shares his secret with a neighbor—and the results are eternal.” - Nativenetworks.com
“VEST MADE OF MONEY is a fascinating story taken from community legends by Patricio Luna.” - Jeff D. Himpele, Circuits of Culture: Media Politics and Indigenous Identity in the Andes