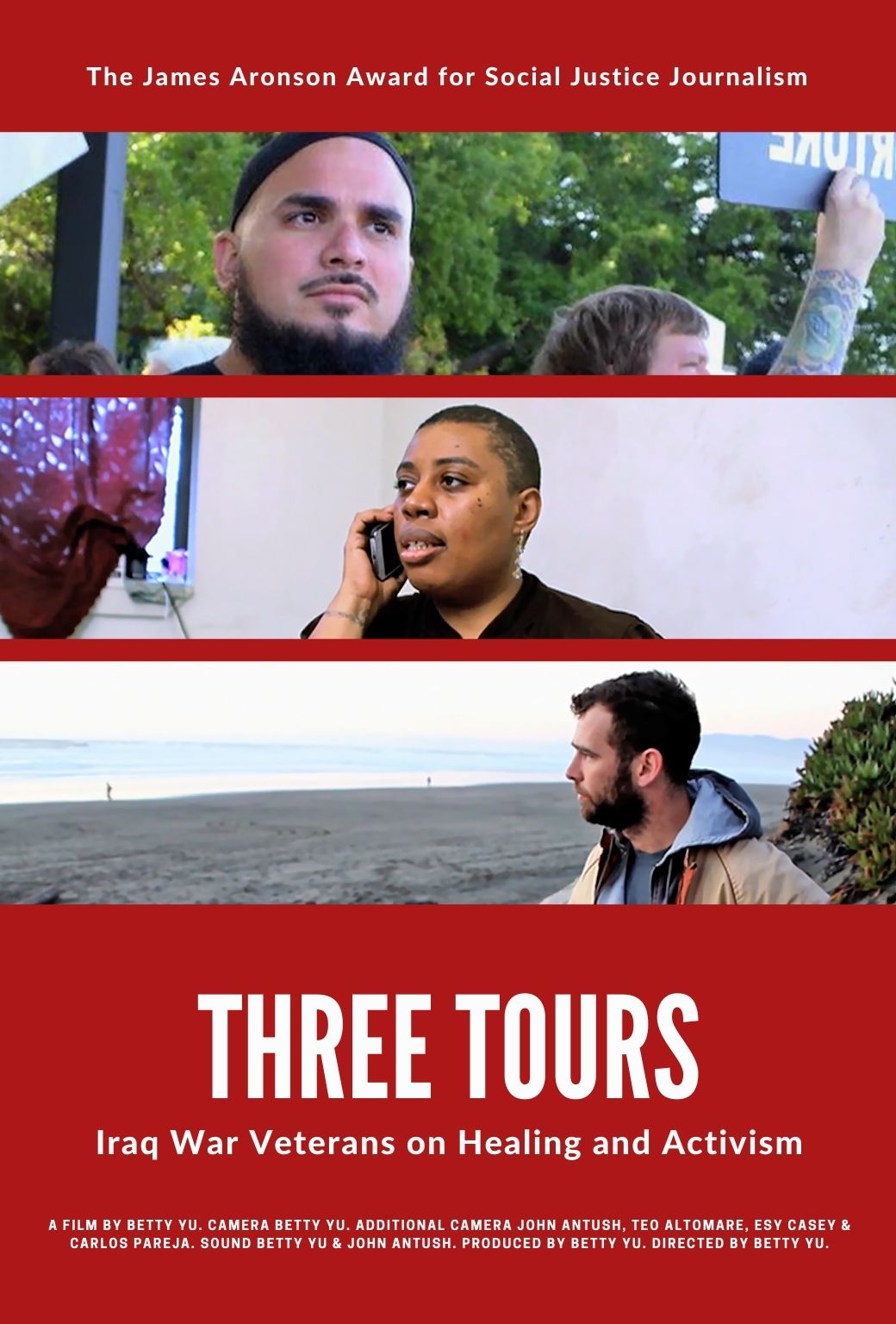 Three Tours
Betty Yu
Producer: Betty Yu
2016
Color
49 minutes
US
English
Trailer and More
-  Watch Trailer
Photos
Press Packet
Study Guide
Three Tours
"Nicole Goodwin, Ryan Holleran and Ramon Mejia are three U.S. military service members who deployed to Iraq after 9-11 to fight in the “Global War on Terrorism.” Nicole and Ramon served in Iraq during “Operation Iraqi Freedom,” the initial invasion in 2003, while Ryan deployed during “Operation New Dawn” at the end of the war in 2011. Three Tours is a documentary film that captures the lives of these three veterans as they work to heal the wounds and battle with Post Traumatic Stress Disorder (PTSD) resulting from their direct experience with the traumas of war. Told through their own voices, Three Tours documents their profound transformation from U.S. military trained killers to agents of change advocating for proper mental health treatment of veterans and an end to unjust wars.

The film captures the personal journey of each of these veterans, as they work to heal their wounds - through activism, writing, teaching and religion. Ramon, a Marine veteran, converted to Islam which became his vehicle to finding inner peace. Ryan, an Army veteran, became an activist with Iraq Veterans Against the War and Under the Hood Café, two anti-war veterans organizations. Nicole, an Army veteran, found healing through writing and sharing her poetry about her experiences in Iraq. All three veterans come together through their shared experiences, desire to tell their own stories and activism. Each of these veterans embarks on their personal journey seeking inner peace, restoration of their humanity and forgiveness for taking part in an unjust war.

The film takes places at a time when military suicide is at an all time high, surpassing combat deaths in 2012. An estimated 50% of returning veterans suffer from PTSD or Traumatic Brain Injury, and 60% of women have experienced sexual assault. Because only .5% of the U.S. population is fighting these wars, it’s far removed from the American people’s daily consciousness. It’s against this sobering backdrop that these stories take place. At its core, Three Tours is about three veterans who are struggling with deep pain and regret for what they’ve done, and are working to find a way to heal those wounds.

“Three Tours” film starts with a definition of “Tour”. “Tour (noun): an activity in which you go through a place in order to see and learn about the different parts of it.” The film interweaves three intimate portraits. Its narrative arc is chronological and is roughly divided into four “acts:” Act 1) joining the military, Act 2) experiences in Iraq, Act 3) coming home and coping with PTSD and Act 4) the transformation and path to healing their wounds."

"Through three intimate portraits of veterans, Three Tours reveals the true costs of the U.S. military's practices and policies for those who serve. The film takes an unflinching look at the moral injury and psychological damage inflicted on the soldiers who are on the ground in America's wars. These brave veterans' stories are a powerful indictment of militarism and call to find better ways of managing conflict and taking care of our most vulnerable on both sides of conflict. This film is an excellent tool for opening up dialogue with high school and college students, and a potentially transformational resource for veterans, their families and those who work with them when they come home." - Kelly Anderson, Filmmaker and Chair of the Film and Media Department at Hunter College