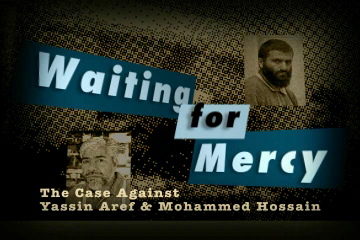 This documentary tells the story of a fictitious FBI plot in Albany New York to entrap Yassin Aref, 37 a refugee from Kurdistan in northern Iraq and Mohammed Hossain, 51, a United States citizen and an immigrant from Bangladesh. The plot was organized by the Albany Counter-Terrorism Task force, the Justice Department, local police and IRS agents and was arranged to portray these 2 men as “potential terrorists” who knowingly participated in a plan to send a shoulder fired missile to New York to attack the Pakistani Ambassador. They were arrested in 2004 and charged with money laundering and material support of terrorism. Mohammed Hossain owns his own business, the Little Italy pizza shop in Albany and has been in this country for 30 years, and Yassin Aref the Imam of a local Albany mosque is an immigrant from Northern Iraq, who arrived in the country eight years ago through the United Nations Refugee program.

Using interviews, local TV news, including a CSPAN press conference (where acting Attorney General James Comey announced the case in Washington) and newspaper articles (national and local) ; the film begins with the night of the arrest August 5, 2004. Mohammed Hossain and Yassin Aref were arrested in the middle of the night, Mohammed returning from New York City after purchasing an airline ticket to visit his mother in Bangladesh and Yassin at his house at 44 West Street in Albany. Both families and the community were shocked by the violence of the raid as their houses, the local mosque were searched, materials seized and their children intimidated.

In a nationally covered Federal case, the two men were accused of 30 counts of money laundering, and conspiracy charges and of knowingly participated in a plot to attack the Pakistani Ambassador in New York.

In 2006, after a month long trial -the two defendants were convicted of multiple charges of material support and conspiracy and sentenced to 15 years in prison, Mohammed is in the Fairton Federal Prison in New Jersey and Yassin is in the Terre Haute Correctional Facility Prison and is housed in the infamous Communication Management Unit (CMU) section.

"One wonders why the government spent so much time trying to tempt law-abiding people into crime rather than pursuing active miscreants. Neither Hossain nor Aref had any criminal history, nor did they have any confirmed ties to terrorist movements. Combining interviews, television clips, and newspaper stories, Bernstein makes a plausible argument for entrapment and frame-up. Overall, WAITING FOR MERCY provides a disturbing look at what was most likely a miscarriage of justice. Recommended." - Video Librarian Journal
"Highly Recommended. Was this good criminal investigation and good prosecution, or was this a case of police entrapment combined with a prosecutorial law that denies "due process" procedure? Regardless the viewer's response to this question the film provides ample discussion material to call for debate and analysis of how criminal law and procedure is developing in the United States of America in the aftermath of 9-11." - Educational Media Reviews Online (EMRO)