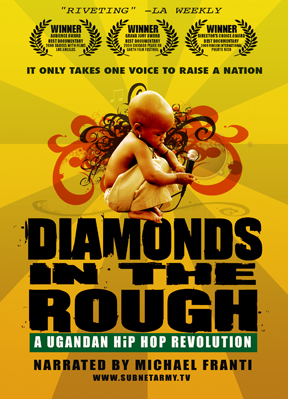 Diamonds in the Rough: A Ugandan Hip Hop Revolution
From the ashes of four decades of war, AIDS and corruption in Uganda, The Bataka Squad artists, Babaluku and Saba Saba, rise to forge a revolutionary path using music. They are on a mission to empower the forgotten youth of Africa from within, while spreading their message of hope around the globe. Narrated by Spearhead singer Michael Franti, follow the Bataka movement to amplify the spirit of the next generation in this musical journey.

Diamonds in the Rough offers a raw glimpse of urban Africa through the eyes of four emerging Hip Hop artists in the Ugandan capitol of Kampala. They teach us how to struggle with a smile, how to make the best of life against insufferable odds, how to create our own opportunities and flourish through positivity, presenting a refreshing contrast to the commercialized bling bling gangster rap here in America. These artists are the voice of the new generation, the heroes of their community and a group of active, enthusiastic and energetic young people more concerned with global change then how much change they have in their pockets.

"This fast-paced documentary, which is narrated by Spearhead lead singer, Michael Franti, introduces audiences to the unique sound and style of Ugandan hip hop or lugaflow. Characterized by politically charged and socially conscious rap lyrics, lugaflow brings with it messages of both anger and hope. The film follows several Ugandan artists and illustrates both their influences and the impact they have on other young people in their own country and abroad. For providing a perspective on global hip hop as a language of the oppressed and a closer and deeper look at youth culture in Uganda, the film is recommended." - Linda Frederiksen, Educational Media Reviews Online
"Many forms of music, themselves with roots in many cultures, have diffused from the West to impact non-Western societies. Currently, some of the most powerful effects are coming from hip hop, which is the subject of the wonderful DIAMONDS IN THE ROUGH, documenting the hip hop revolution in Uganda, the African continent, and the global community. This documentary is an important and appealing contribution to the discovery of the social power of music and of the arts more generally. Suitable for high school classes and college courses in cultural anthropology, anthropology of music, anthropology of development/community activism, and African studies, as well as for the general audiences." - Jack David Eller, Anthropology Review Database