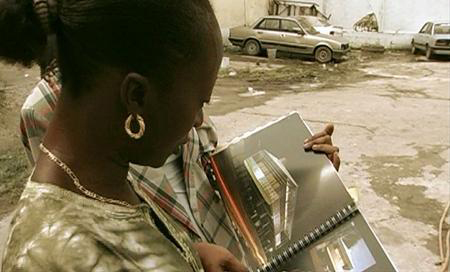 Maison Tropicale
Manthia Diawara
2008
Color
58 minutes
Republic of Congo/France
French
English subtitles
Trailer and More
-  Watch Trailer
Photos
Press Packet
Maison Tropicale
In 2008, filmmaker Manthia Diawara and artist Angela Ferreira travelled to Brazzaville, Republic of the Congo to “search through the debris left behind by those who took away the [Maison Tropicales].” Designed by French architect and designer Jean Prouvé, the Maison Tropicales were a set of prefabricated houses built out of aluminum steel that could be disassembled, transported to a different location, and then reassembled with ease. The purpose of the portable structures was to address the housing and civic building shortage present in France’s colonies in Africa during the late 1940s.

Prouvé manufactured three individual prototypes of the Maison Tropicales, all of which were dismantled and shipped back to Europe in the year 2000 by an art dealer to be displayed in various exhibitions. Despite their removal from Brazzaville, Diawara’s chief goal in his documentary was to “reconstruct a post-colonial history of Jean Prouvé’s Maison Tropicale to reveal the ghost stories of the relationship between Europe and Africa… The powerful and the disempowered.”

In Diawara’s conversations with the local populace of Brazzaville, it is revealed that a strong majority of them maintained a sense of caution and fear towards the Maison Tropicales, often referring to them as somewhat peculiar and alien. Speaking about the history of houses’ creation with regards to European colonialism of the African continent, Besongo, an artist from Brazzaville, was quoted as saying, “The white man is very dangerous… They got the house and took it to Paris, and turned it into a show, into a spectacle. You see? This makes me think.”

This documentary serves to complement Ferreira’s art project on the Maison Tropicales, as well as to unearth the hidden stories and memories that were “left behind” when the houses were removed from Africa. Diawara’s Maison Tropicale is a post-colonial excavation into African identity, art, and the notion of cultural patrimony. Any student of African cultural studies or history, European colonialism, or architecture will find this film particularly useful.