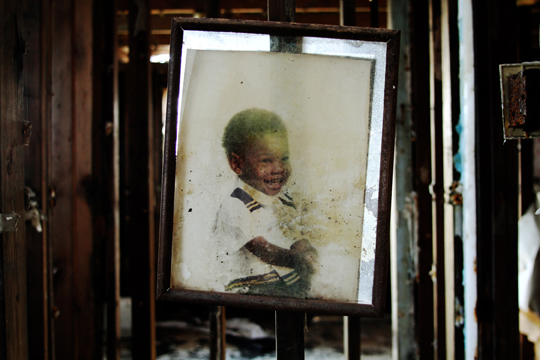 Bordering the Mississippi River to the south and the Industrial Canal to the west, the family centered community of the Lower Ninth Ward was one of the most devastated areas of New Orleans after Hurricane Katrina. The 12-ft levee wall running north to south along the Industrial Canal ruptured in numerous locations, allowing flood-waters to rise above rooftops, destroy homes and cripple the foundations of this historic community.

Prior to Hurricane Katrina, the Lower Ninth Ward was home to more than 14,000 residents, 5,600 homes, numerous schools, parks, medical facilities and businesses. Since Katrina, only 20% of its former residents have returned, one school is operational, the main hospital is non-functional, two of five parks are usable and over 3,500 of the original 5,600 homes are destroyed, abandoned or non-existent.

Entrance into the Lower Ninth Ward neighborhood was restricted from August 2005 to May 2006. Nine months after Hurricane Katrina, residents were finally allowed back into the area to discover what was left of their homes and possessions. In May 2006, as residents returned to their destroyed lots they quickly realized they had two options, rebuild or move away.

THE LOWER 9: A STORY OF HOME looks beneath the disaster to reveal the community, personal stories and importance of this tightly knit neighborhood. This is not another Katrina film but a film that looks before the storm to keep the focus and attention on the people and culture of New Orleans and the Lower Ninth Ward.

“Most Americans are tired of Katrina stories, or perhaps we think the city is mending. Think again. Matthew Hashiguchi & Elaine McMillion’s new documentary, THE LOWER 9 is a deeply disturbing, but an astonishingly beautiful visual and oral account of the ongoing devastation and broken promises that residents of one of New Orleans’ hardiest hit communities still face. The six storytellers recount vivid memories of family, food, music, church and hard work that defined their primarily working and middle class African American community before the flood; and they make clear that today… in 2011… right now…their community has not recovered from the 2005 catastrophe, that many former residents who want to come home-- cannot, and that the community wants and needs the support of the American government and others who say they care about New Orleans.” - Julie Gustafson, Independent Filmmaker
“THE LOWER 9 is haunting and beautifully crafted. The film gives voice to six survivors of Hurricane Katrina. It does not concentrate on the catastrophe and aftermath, as many films have done, but instead focuses on the recollections of those who survived and stayed, as they describe the community that is no more. Their interviews are intermixed with detailed images of the ruin that allow us to contemplate the lives that were lost and changed. With understated power, THE LOWER 9 makes a convincing argument for rebuilding the neighborhood and not forgetting its inhabitants.” - Jan Roberts Breslin, Director of Visual and Media Art at Emerson College
"Six New Orleans residents share stories about life before Hurricane Katrina in this oral-history-style documentary… Images of the devastated remnants of homes are intercut with scenes from house parties, backyard barbecues, church services, and a street corner rap session… Offering a powerful look at Katrina's legacy on one of the hardest hit areas of New Orleans, this is recommended." - K. Fennessy, Video Librarian Magazine