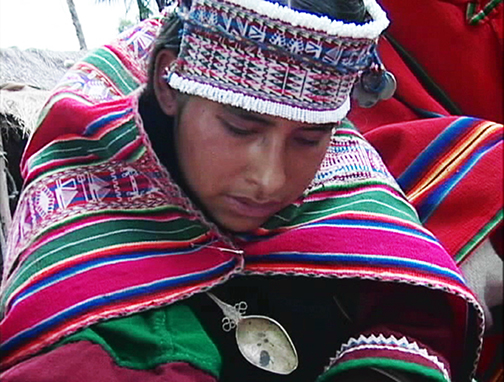 To Light the Spirit
Reynaldo Yujra
Producer: CEFREC/CAIB
2002
Color
45 minutes
Bolivia
Aymara/Quechua
English subtitles
Photos
To Light the Spirit
Kanchari'y/Para Encender la Luz del Espíritu
In a collective production, an Aymara filmmaker follows the Kallawayas, healers and spiritual leaders of the Chari community of La Paz, to learn about the indigenous reality of the region. Traditional medicine practices are documented, providing insights into the Kallawaya worldview.

TWN is proud to release the work of the Bolivian indigenous media collective CEFREC/CAIB. Since 1996, CAIB (Bolivian Indigenous Peoples’ Audiovisual Council) and CEFREC (Cinematography Education and Production Center) have been at the forefront of indigenous cinema in Latin America, producing a vast catalog of documentaries, docudramas and fiction films for local indigenous communities. Although the work of CEFREC/CAIB has been featured in numerous international film festivals outside Bolivia, this unique collection has not been available for purchase outside the local Bolivian market until now.

“Video becomes a crucial technology for the reinvention of indigenous cultures, directed against the effects of the long-standing discrimination of indigenous people, languages, medicinal practices, as well as their social and economic relations.” - Freya Schiwy, Decolonizing the Frame: Indigenous Video in the Andes