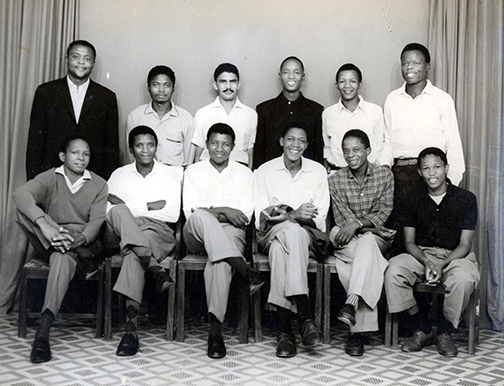 In the wake of his stepfather’s death, Thomas Allen Harris embarks on a journey of reconciliation with the man who raised him as a son but whom he could never call "father." As part of the first wave of black South African exiles, Harris’s stepfather, B. Pule Leinaeng, and his eleven comrades left their home in Bloemfontein in 1960. They told the world about the brutality of the apartheid system and raised support for the fledgling African National Congress and its leader, Nelson Mandela. Drawing upon the memories of the surviving disciples and their families, along with the talent of young South African actors who portray their harrowing experiences, TWELVE DISCIPLES OF NELSON MANDELA tells an intimate story of family and home against the backdrop of a global movement for freedom. A co-production of the Independent Television Service (ITVS), in association with P.O.V./American Documentary and the National Black Programming Consortium.

TWELVE DISCIPLES OF NELSON MANDELA is the third installment of the Paulding Avenue Trilogy, which also includes VINTAGE and E MINHA CARA.

"A fascinating glimpse not just of the early campaigns of the ANC, but also of the way childhood memories can obscure larger truths." - New York Times
"For audiences only vaguely aware of the details of the ANC’s gestation and Nelson Mandela’s place in the organization this work places the rocky details in detailed context. More knowledgeable viewers will appreciate the rare footage and clippings unearthed by Harris." - Variety
"Harris’ trademark elegant visual style is put into the service of dramatic recreations that flesh out documentary commentary from old friends and political allies while family photos and home video become potent artifacts in the transformation of grief into celebration." - LA Weekly
"Here’s something of a miracle: an intensely personal yet historically expansive docudrama that exhibits few of the deficits of genre mixing or cinematic self-analysis. As if that weren’t enough the humane, aesthetically assured film all but rescues the early anti-apartheid movement from death by deification." - Time Out, New York
"A deeply personal portrait of a father-son relationship that also details the important historical journey of twelve fearless revolutionaries." - indieWIRE
"In this documentary Thomas Allen Harris tells the story of his stepfather Benjamin Pule Leinaeng (Lee) and provides us with the story of a freedom fighter in exile. Lee was one of the first African National Congress (ANC) youth league members in Bloemfontein... As Harris tells the story of his stepfather, the viewer comes to understand the difficulties Lee faced living away from home. Highly Recommended." - Esmeralda Kale, Educational Media Reviews Online (EMRO)
"The historical backdrop upon which Harris illuminates his stories is riveting. He uses original footage and stills shot by his family during pivotal times in history: the Martin Luther King, Jr. assassination, the Black Pride movement of the '70s and the anti-Apartheid movement in Africa. He is an eyewitness to history, and his trilogy dovetails his inquiries into personal a - Adrena Ifill, Documentary Magazine
"Much of Thomas Allen Harris's film work has involved looking into his personal history, which was shaped by the absence of his father, childhood years spent in Tanzania, his gay identity, and a grandfather interested in photography. While the emotional resonance of his films may reside in his family stories, Harris opens up the possibility of political action and social change by placing them within larger community contexts. His films boldly move from pain to celebration, from the personal to the epic." - Kathy Geritz, Film Curator, Pacific Film Archive