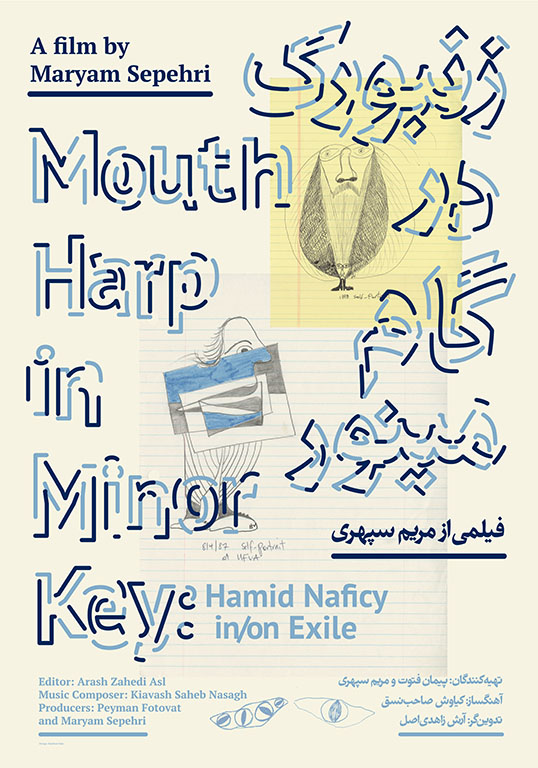 Mouth Harp in Minor Key: Hamid Naficy In/On Exile
Maryam Sepehri
Producer: Maryam Sepehri
2017
Color
61 minutes
US/Iran
Persian/English
English
Trailer and More
-  Watch Trailer
Photos
Press Packet
Mouth Harp in Minor Key: Hamid Naficy In/On Exile
For Iranian scholar Hamid Naficy, exile is like an elevator that runs between “two cultural poles, two memories, two lives.” Naficy belongs to the Iranian generation that lived through the modernization of the country that preceded the Islamic Revolution of 1979, and the Islamization that followed it. Like many Iranians who were studying in the United States universities when the revolution began, he chose not to return to Iran.

Both bilingual and bicultural, Naficy is known for conducting penetrating analyses of both the rich cultural heritage of his homeland—his roots—and of the fecund terrain of exile in his adopted land—his routes. In his adopted country, he became a professor at Northwestern Univerisity, published author, filmmaker, leading expert in diaspora studies, exile, and postcolonial cinema, as well as a husband and father. At the same time, he managed to keep a close link to Iran, his culture, his family and more importantly, his mother.

Iranian filmmaker Maryam Sepehry followed both Hamid Naficy in the United State and his family in Iran to capture a documentary portrait that packs a powerful punch elucidating the complexities of personal identity in a globalized world, where individual, national, and transnational forces interact. A timely documentary film about exiles in America and the families they left behind, MOUTH HARP IN MINOR KEY sheds light on the dynamics of our contemporary times, beset by globalization and consolidation of capital and media, on the one hand, and by fragmentation and disruptions of nation-states, on the other.

"Exile as a radically transformative experience is the theme of this documentary tracing the journey of Hamid Naficy from his boyhood growing up in Iran under the Shah to the 1979 Revolution, when he was studying in the U.S., to his present as the foremost historian of Iranian cinema and renowned authority on Iranian diaspora culture. Filmmaker Sepehri explores the impact of history before and after the Islamic Revolution on the generation of those whose lives are divided between early life in the homeland and an adulthood in permanent exile in the West. The film delineates Naficy’s unique role as an interpreter of the experience in all of its complexity. In English and Persian with English subtitles." - Festival of Films from Iran, Chicago